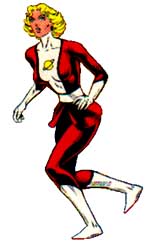 From email we received from Dan'l Danehy-Oakes on 16 March 2006:

I notice that your Big List only mentions one member of the "Legion of Super-Heroes." Several others have pretty clear religious leanings of one sort or another...

Saturn Girl (Imra Ardeen Ranzz) is an interesting case - she seems to be either Catholic or High Church Anglican: at least her marriage to Garth (Lightning Lad) Ranzz, and the baptism of their first two children, were performed by priests in circumstances that looked Catholic. But she doesn't seem to be very devout; and at one time she paid homage to the evil god Darkseid (admittedly, not a religious sort of homage, but still...)

Other characters not [yet] on the [Religious Affiliation of Comic Book Characters] list:
Shadow Lass - ancestor worshipper
Element Lad - New Age
Lightning Lad and Saturn Girl - at least one of them was some kind of Christian, since their first child was baptized
[some others listed...]

This character is in the following 24 stories which have been indexed by this website:

Justice League of America (vol. 2) #10 (Aug. 2007): "The Lightning Saga, Final Chapter: The Villain Is the Hero in His Own Story" (someone disguised or dressed as)