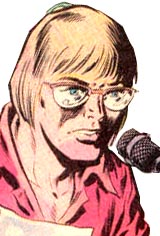 The Religious Affiliation of
Richard Rory

Other Names: The Jinx who Walked

Scott Andrew Hutchins prompted us to consider Richard Rory's religious affiliation more in depth when he said (via email, 2 December 2008):

Richard Rory and Ruth Hart would appear to be hippie-influenced, though not necessarily hippies. He discusses marriage with Hart rather quickly after they meet, suggesting he's not into "free love."

Richard Rory actually is overtly labeled a "hippie" by some reference materials and commentaries. But we essentially agree with Hutchins' general take on the character. In our recollection of Richard Rory's appearances, he is more "hippie-influenced" than an all-out hippie himself. Certainly many hippie comic book characters we have noted are far more extreme in the degree to which they are portrayed as hippies. Lacking any other classification for Richard Rory, we will list him with hippies. But one should keep in mind that he was a more three-dimensional character than many comic book hippies and being a hippie can certainly not be said to be the only source of his identity and characterization. Stories in which he was called a "hippie" or did things that were stereotypically hippie-like, if they exist, are probably minimal. Richard Rory's classification as a hippie may stem mostly from the general vibe the character exuded and the cultural milieu he embodied.

As Hutchins points out, Richard Rory's discussion of marriage with Ruth Hart suggests that Rory's values at the time were more in line with traditional religious and cultural values than with pure hippie philosophy, which espoused "free love" (i.e., non-committal sexual promiscuity). Rory's consideration of marriage is in keeping with his characterization as a hippie (or perhaps "recovering hippie") who was probably never truly a stalwart of the hippie movement. By 1974, when Richard Rory was first introduced, the hippie movement was already beginning to wane. Some of the movement's ideas and aesthetics were still in vogue, but the pendulum of American culture was returning toward a more traditional mindset by the mid-1970s. Richard Rory was never entirely intended as an American "everyman. Nevertheless, he was more a reflection of a fairly average, commonplace American persona than he ever was an embodiment of a specific ideology or philosophy. If Richard Rory was introduced in 1974 as a "waning hippie" and to some extent remained that way, it was probably because he was a product of his time and creator Steve Gerber's acute sense of contemporary American culture. 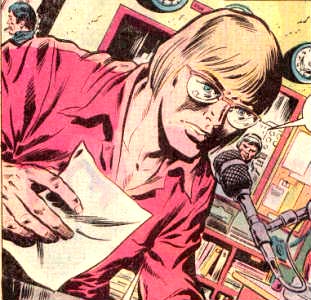 From email we received from Scott Andrew Hutchins on 2 December 2008:

Richard Rory and Ruth Hart would appear to be hippie-influenced, though not necessarily hippies. He discusses marriage with Hart rather quickly after they meet, suggesting he's not into "free love."