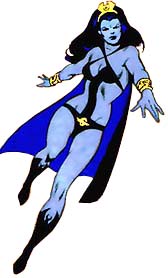 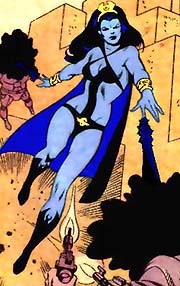 Other characters not [yet] on the [Religious Affiliation of Comic Book Characters] list:
Shadow Lass - ancestor worshipper
Element Lad - New Age
Lightning Lad and Saturn Girl - at least one of them was some kind of Christian, since their first child was baptized
[some others listed...]

Shadow Lass is a fictional character in the 30th century of the DC Universe. She is a member of the Legion of Super-Heroes. Her real name is Tasmia Mallor and her homeworld is Talok VIII. She has the power to project darkness. Like all Talokians, she has blue skin and pointed ears. She received her powers along with her cousin Grev, Shadow Kid from the spirits of her ancestors in a cave on Talok. (Talokians practice ancestor worship). She is the hereditary shadow champion of Talok VIII as her ancestors had been before her for over a thousand years.

She joined the Legion after her homeworld was invaded by the Fatal Five and she helped the Legion to defeat them. After joining, she became romantically involved with Mon-El. She eventually married him after he was mortally wounded fighting the Time Trapper as part of the conspiracy to avenge Superboy's death at the Trapper's hands...

In the post-Zero Hour universe, she went by the codename Umbra and had a much more aggressive and businesslike attitude. This version of the character did not become romantically involved with the post-ZH counterpart of Mon-El...

Shadow Lass has appeared in the reimagining of the Legion which occurred starting in 2004, however as yet little has been revealed about this version of the character.