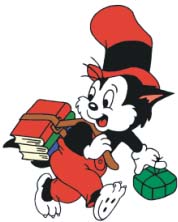 Note: not very bad at all; friend of Three Little Pigs

Li'l Bad Wolf was introduced in a self-titled feature in Walt Disney's Comics and Stories #52 (Jan. 1945). Aside from appearing under the feature character's name, the story was untitled but is sometimes given the title "Forced to Build Trap" by indexers.