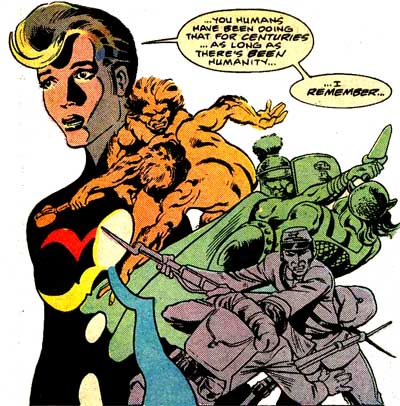 The Religious Affiliation of
cavemen

Unnamed cavemen appeared in Adventures of the Outsiders (vol. 1) #33 (May 1986), illustrating Halo's contemplation about humans violently fighting each other for "as long as there's been humanity."

Unnamed cavemen appeared in Dark Avengers #4 (June 2009). In order to defeat her, Doctor Doom transported Morgan Le Fay back in time to the year One Million B.C. A splash page depicted the result. This page, with the only narrative text reading "England, One Million B.C.", depicts a frightened Morgan Le Fay running away from a savage Tyrannosaurus Rex dinosaur, who is also chasing a band of about seven cavemen.