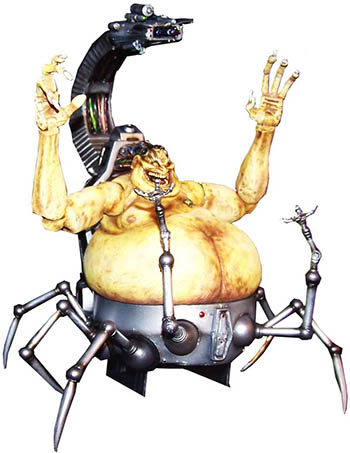 The Religious Affiliation of
Mojo

Other Names: Auteur; The Spineless One; The Lifebringer; Mojo Adams 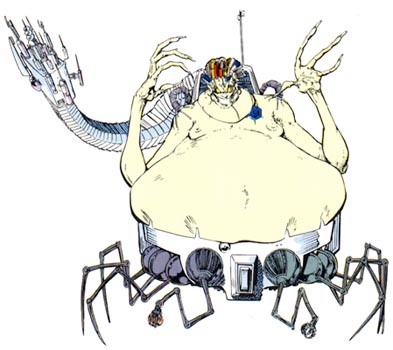 From: "Mojo", on the Cerebra's Files website (http://www.mutanthigh.com/mojo.html; viewed 8 February 2007):

Powers & History: Mojo is the name of the ruler of the aptly-named Mojoworld, an alternate dimension. There have been three Mojos seen so far, with the third (Mojo V) living a hundred years in our future. Mojo III and IV have not been seen as yet. All of them are members of the race called the Spineless Ones, who are fat blobs driven mad by time-warped transmissions from Earth. Like the rest of their race, they must fixate on their own programs to have any mental peace. The Mojos are the supreme programmers of Mojoworld, and constantly strive for better ratings, which give them power over the populace. Mojo I and V were constantly in conflict with the engineerd bipeds, whom they used as slave actors, forcing them to rerun their failures over and over again.

Mojo I was the nemesis of Longshot, a genetically-engineered mutant who was created to destroy him. He got around in a spider-legged robotic platform with a giant movable tail, and was able to fire energy blasts from his hands. He transformed Ricochet Rita into Spiral to torment Longshot, and once regressed the created the X-Men to childhood to make them more amenable to starring in his shows. Later, Mojo created the X-Babies (miniature versions of the X-Men) to boost his ratings after Longshot's escape to Earth. At one point, he had control of Rachel Summers under an exclusive contract, but she escaped to form Excalibur. Mojo sent his Warwolves after Rachel, but they failed to bring her back. Finally, Longshot returned to Mojoworld, and with the X-Men's help rallied the resistance fighters to storm Mojo's citadel. Once inside, the coup was aided by Mojo II, and Longshot finally killed Mojo I by stabbing him with a sword.

Mojo II - The Sequel helped the resistance fighters, specifically Dazzler, overthrow his immediate predecessor. He called himself a clone of Mojo I, but appears to have shed his bulk and used cybernetic to retain a biped humanoid shape. He took over as leader of Mojoworld after Mojo I's death, but has not been seen since.

Mojo V is identical to Mojo I, but his nemesis is Shatterstar, who lived 100 years after Longshot. Mojo V has tormented Shatterstar even in our world, hiring Arcade twice to capture 'Star and pit him against other heroes, X-Treme the first time, and Domino the second. In one future, he was defeated by Cable and X-Force and Shatterstar was installed as ruler of Mojoworld. In another very strange event, Mojo (which may have been Mojo I or III, but was most likely V) sent his minions to capture Shatterstar, who apparently died one hundred years in the future while fighting his fat nemesis. Cable followed Shatterstar, and watched as 'Star died, but was then able to save him through a convoluted process involving Spiral, Benjamin Russell and 'Star's "umeur," or soul. Mojo apparently survived. The possibility exists, however, that this entire event was a deception of the Gamesmaster, and that Mojo I (if this was him and not Mojo V) is actually still dead.