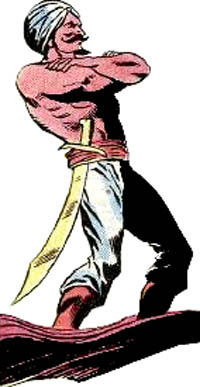 re: "I don't think there are any followers of Buddhist, Islamic or Shinto traditions"

...No Islamic mutants that I'm aware of (perhaps the Shadow King), but Arabian Knight was a Muslim hero.

Well, anyways, I was thinking of an idea for a UN-sanctioned super hero team with represenatives from different countries, and one of them is a female telepath from Turkey... named Sultana. And I suddenly realized that for the life of me I can't think of a single Muslim super-hero from either Marvel or DC.

There was the Arabian Knight in Marvel but he died.

...Arabian Knight? From that Contest of Champions thing in the 80's? Please don't tell me he died by blowing himself up...

No, he [Arabian Knight] died from a mutant who when he used his powers would kill a random person on Earth.

There's Arabian Knight (Saudi Arabia) and Batal (Syria), both from Marvel... beyond that, I don't know. Wikipedia doesn't have any convenient listing.

I can't think of a single Muslim hero apart from the Arabian Knight.

Hey guys, most of you probably know that I'm Muslim and I've made that pretty obvious with lines like "Holy Muhammad's spit" and "Sweet Prophet". I was checking out Wikipedia and found a list of fictional Muslim characters,it was a short list, one of them was Dust from the New X-Men, an Afghan girl wearing a Burqa and all, and there was a link to an Islamic forum that wasn't too crazy about the character. Now... I know us Muslims aren't exactly the most liked people in the world right now but what do you guys think? I mean, at the top of my head,I can think of only two Islamic 'Heroes': Dust and... Arabian Knight from Marvel, and maybe that Turkish heroine who appeared in JLA way back and maybe just maybe David Said from Checkmate. Most of the rest are your atypical terrorist leaders and masterminds or victims of... Islamic tyranny. Is that how comic books and most Western media see Islam? Sorry to bring this topic up, but I really needed to get this off my chest. Peace be upon you, my fellow blood-thirsty Bat-fans.

I never realized there were so many Jewish superheroes. How many Muslims then? Outside of Arabian Knight and Wise Son I can't think of too many.

...There are precious few heroes of faith in comics, mainstream or alternative, and the more I think about that, the less I like it. Most heroes' religion is used as a type of shorthand characterization, something to fill space in the Handbook... As for other faiths, they're often reduced to embarrassing costume elements and stereotypes (c.f. Arabian Knight, Dust, any Amerindian character ever, any voodoo-themed character except for Empress, and even Sabra, Marvel's defender of Israel).

The never-identified but usually heeded "they" claim that there are two topics you should never talk about: religion and politics. But since Mike already brought up religion... I'll follow it up with a link to this page [link to: http://www.adherents.com/lit/comics/comic_book_religion.html], which lists the religious affiliations of various comic book characters...

[Comments posted by readers of this page:]

...I don't think there's much value in debating the supposed religions of characters. It's a distraction except as a short hand to point out a character's cultural context (chances are the Arabian Knight is a Muslim). While comics can address the spiritual struggle of good vs evil, it will do less well on actual theological matters...

...Now apply all the mess of religious debate to the comic world. Yeah... not fun. After 9/11 I really wanted to see Captain America (I'm guessing a Protestant based character... my assumption) team up with the Arabian Knight so they could do some sort of unity between religious/cultural beliefs against violence. Didn't happen. Would've been a good one folks...

You brought up the issue of comic-book stereotypes and religions. Since I study religion (all kinds, really) this is something I've thought about a lot.

First the issue of stereotypes in general: The first major black Marvel characters were the Black Panther (Phantom/Tarzan-like jungle lord with a name that may or may not have predated the American political party by that name), Luke Cage (1970's blacksploitation character), Falcon (sidekick with a criminal past), and Storm (African princess modeled after Lt. Uhura). Throw on the Arabian Knight (actually an Egyptian, he had a scimitar and flying carpet), Shamrock, Batroc ze Leaper, and every German except Nightcrawler. I see all this as stemming not from maliciousness, but from the tendency of comic books to deal in stock characters, as a kind of shorthand. Later attempts improved with time, for the most part, though new characters have always had greater difficulty gaining a foothold...