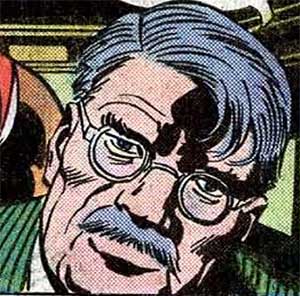 The Religious Affiliation of
Mason Harding

Professor Mason Harding designed the weapon known as "Madbombs." Later, while in jail, he tried to help Captain America recall his past.

The Madbombs utilized a new technology developed by Harding. Their purpose was not physical destruction as with traditional bombs, but the destruction of human sanity. The bombs affected the human mind and drove people crazy. The bombs were developed for the "Elite," the leading faction of the Royalist Forces of America, who wanted to topple the current American government and replace it with their own hand-picked elite leaders.

The Madbombs came in a variety of sizes. "Big Daddy" was the largest bomb, and was big enough that it would have affected the entire United States had it been successfully deployed. The "Dumpling" was much smaller, big enough to affect all the people in a neighborhood. One Dumpling was set off in Harlem, New York. The smallest variety of Madbomb was the "Peanut." Mason Harding used a Peanut Madbomb in order to escape the Royalists after he decided to part with them.