The Religious Affiliation of
unnamed clergyman

Serafina, a member of the technologically powerful "Children of the Vault," infiltrated the X-Mansion and found the comatose mutant Lady Mastermind. Serafina tapped into Lady Mastermind's illusion-casting powers and created a convincing illusion in Cannonball's mind. Cannonball (Sam Guthrie) appeared to live out an entire life as a non-mutant civilian, meeting and courting "Sarah" (Serafina herself), then getting married and having children with her. An unnamed Christian clergyman officiated at the "wedding" in this illusory life.

The clergyman seen in this illusion may or may not be a real person from Sam Guthrie's past. The clergyman was a black man. He was mostly bald, with hair at his temples. He was quite heavyset. He wore a black clergyman's outfit with a white collar. Based on the one panel in which he appears, the cleargyman appears to be Protestant, but it is impossible to determine exactly what denomination he represents. He was most likely drawn from the memories of Cannonball, who was raised in a fairly religious Baptist home in Kentucky. But the clergyman may also have come from the mind of Serafina, who had a penchant for using religious imagery and had many times in the past caused others to see her as an angel. Serafina, at least in her distant ancestral past, was the product of a predominantly Catholic culture. 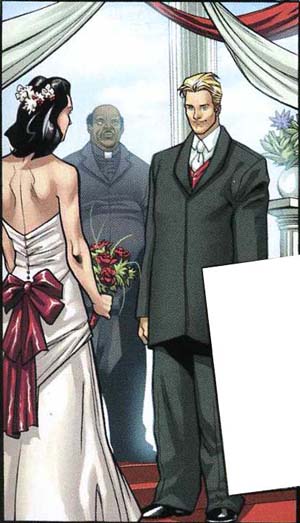 Suggested links for further research about this character and the character's religious affiliation:
- https://www.comics.org/issue/311223/
- http://comicbookdb.com/issue.php?ID=64593