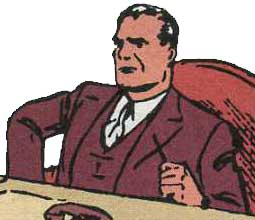 The Religious Affiliation of
George Taylor

Other Names: The Chief

George Taylor was sometimes identified as the "city editor" at the Daily Star. Sometimes he appeared to be the newspaper's editor-in-chief. When he appeared it was always clear that he was the editor that Clark Kent answered to and he was most often simply referred to as "the editor" or Clark Kent's editor.

In many early stories in which Taylor appears, it is possible that he is Clark Kent's direct boss, but isn't the chief editor at the newspaper. But in other stories, it seem like he must be the editor-in-chief because he makes staffing decisions regarding Lois Lane and other reporters who are clearly not on the city beat. Lois, for example, was often the advice columnist or feature writer. Perhaps the biggest reason that George Taylor is recalled as an editor-in-chief is the fact that he is the predecessor of Perry White, whose title as editor-in-chief is well known.

George Taylor was originally unnamed. He appeared again and again as a recognizably recurring character, but was never known by anything other than his title. The character was finally named in a telegraph Clark Kent sent to him. George Taylor's name appears as the addressee in a telegram that is featured in the illustration in panel of page 22 of the story "Superman Champions Universal Peace!", which was published in Superman #2 (Fall 1939). Finally, on the last page of this story (page 24), Taylor's name (his last name only) is mentioned in a narrative text box: "When Clark enters Taylor's office . . ." When the story ends, George Taylor's had still never been mentioned in a word balloon. Perhaps this is not surprising. Taylor was the boss at Star News. The reporters and employees who worked under him called him "boss" or "chief" or "the editor," but rarely referred to him by his name.

Early in the Superman publishing history, George Taylor was rather unceremoniously dropped from Superman's supporting cast and replaced by the now far-more famous Perry White. Action Comics #30 (Nov. 1940) featured George Taylor's last appearance in regular on-going Superman chronology. The character would later be revived for some special stories featuring Golden Age characters. Among the earliest of these stories were "Editor of the Star" in Superman Family #196 (July-Aug. 1979) and ""Superman Takes a Wife" " in Action Comics #484 (June 1978). Still later, George Taylor was introduced as a minor recurring character in a few modern post-Crisis and post-Byrne Superman stories. But for nearly four decades, George Taylor was simply forgotten.

We know that the editor Clark Kent and Lois Lane answer to at the Daily Planet in Action Comics #30 is still George Taylor. On page 2 of the Superman story in that issue Clark Kent rushes into the editor's office exclaiming, "Taylor -- Did you hear--"

George Taylor interrupted, "That broadcast? You bet I did! It sounds like a swell news break -- I want you to cover it at once!"

Thus began Clark Kent's last assignment for editor George Taylor. (The case, oddly enough, involved evil Arab terrorists inflicting snowstorms on Metropolis during Summer.) In the very next story, Perry White was the editor over Clark Kent and Lois Lane at the Daily Planet. No mention was made of George Taylor. The story retroactively titled "Metropolis's Most Savage Racketeers," which was published in Superman #7 (Nov.-Dec. 1940) depicted White on page 2, the first page after an out-of-chronology splash page. Clark Kent and Lois Lane are shown in the office of their editor, a slightly stout man with brown hair and a receding hairline. Clark asks, "Got a good assignment for us, White?"

This was the first indication that Taylor had been replaced.

Despite George Taylor's many appearances, he remained something of an enigma. Essentially nothing was known about his background. Little was known about his personal beliefs, ethics, values or religious affiliation. All that could really be said was that he was a deeply ethical newspaper editor who shared the passion Clark Kent's passion for social justice and disdained evil and corruption. George Taylor was sometimes gruff and might be considered a hard-driving boss. But he was fair and always seemed to agree with Clark Kent when it came to what stories should be covered and what angle to take.

During the time that George Taylor was Clark Kent's editor at the Daily Star, and then the Daily Planet, most published Superman stories focused on a clearly-identifiable social topic. Topics included criminal racketeering, unions, gambling, drunk driving, life insurance fraud, prison reform, war profiteering, foreign espionage, juvenile delinquency, etc. These were clearly topics that Superman writer Jerry Siegel felt strongly about. George Taylor inevitably took the "correct" position on these topics. Taylor championed the cause of the innocent and the oppressed. He used his newspaper's influence to fight against injustice, crime, and corruption.

George Taylor's positions would can probably be classified as "progressive" or "humanistic," but they can also be classified as very ethical, moral, principled and religious (in the broadest sense of the word). Many of the positions championed by Siegel and George Taylor in these early Superman stories would be regarded as predominantly "liberal" by today's standards, but many other positions would be classified as "conservative." Overall, there is a clearly anti-Libertarian bent to the positions of these stories. But overall, Siegel and Taylor were apparently idealists, but not ideologues. The stories were scrupulously non-partisan regarding political parties or philosophies. Their focus was simply on what was "right," not what was "liberal" or "conservative." Although truly complex social topics were often grappled with, positions that would be regarded as genuinely controversial at the time were avoided.

Another way that these early Superman stories avoided controversy was in their observation of the "religion taboo" in popular culture. Essentially everybody that Jerry Siegel and Joe Shuster knew had an identifiable religious affiliation. They could basically categorize everyone they knew as Jewish, Catholic or Protestant. But as did most creators of popular fiction, they avoided overt references to religious affiliation or overt portrayals of formal religious observance. The "good guys" in these stories adhered to a common cannon of positive, patriotic, socially uplifting religious and ethical values. George Taylor didn't need to appeal to reason or cite scripture to explain why he opposed unsafe mining conditions or gambling or child labor. It was expected that all people of character felt the same way.

George Taylor never did or said anything that indicated his precise religious affiliation. Even the causes he championed can not be used to make such a determination, because these were the causes championed by essentially all denominations and organized religions at the time, as well as non-sectarian and secular groups. George Taylor's America of the 1930s and 1940s was long before the country's religious landscape was divided between conservative and liberal factions or between secularism and traditional spiritual/religious factions. There were factious topics and controversial positions during the 1930s and 1940s, but these were not topics tackled by early Superman stories. In the Superman stories of George Taylor's time, characters were almost always clearly good or evil. One simply doesn't find stories featuring opposing forces in which both sides might be correct.

So what can be said about George Taylor's precise religious affiliation? Perhaps nothing. Taylor never said anything distinctive of any particular religious group of philosophy. He never wore anything suggesting affiliation with a particular group. What he did on Sunday morning or Saturday evening was never shown.

Siegel's stories were not particularly revealing about Clark Kent and Lois Lane's religious beliefs either, but by the time Taylor last appeared, both Lois and Clark had made religiously distinctively statements. George Taylor never did.

George Taylor demonstrated that he was a champion of what was right and fair and ethical and patriotic and just. But none of this diagnostic. Taylor's positions were supposed to be universal among churches, denominations, religions, and individuals of good character.

This character is in the following 44 stories which have been indexed by this website: