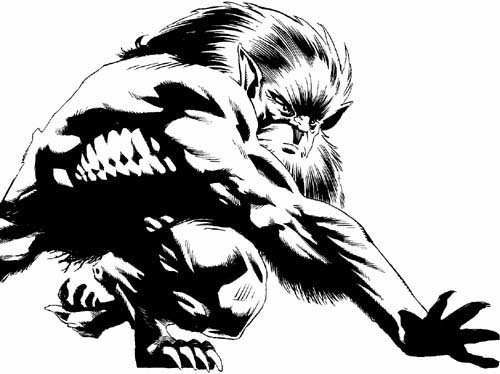 The Religious Affiliation of
Argent the Wolf
Dream Picker

Just out of curiosity... how many people are aware of the work of WM Loebs?

Silverback was a three issue mini published by Comico back in 1989. It has never been reprinted as far as I know and it had a pretty small print run during the days of Comico's financial difficulties.

This book details the backstory of Grendel's nemesis Argent, the main protagonist to the Hunter Rose and Christine Spar incarnations. It was co-plotted by Grendel creator Matt Wagner and written and drawn by William Messner Loebs.

This book was well suited to Loeb's strengths. It's a sad, scary, grisly affair concerning a Native-American werewolf and the past that haunts him. Argent is a 300 year old Indian shaman who was cursed by his tribe for a forbidden love affair. The Silverback series portrays argent as an ordinary man possessed by the spirit of Masun, the spirit of death.

You don't necessarily need to have read any of the Grendel comics to enjoy this stand-alone work.

I don't know how successful Dark Horse has been with their Grendel trades (or if they still have the rights to Grendel), but I think this three issue series would make a good trade paperback if it were packaged with Bernie Mireault and Matt Wagner's three issue Devil Inside arc that followed immediately after the Christine Spar/Pander Bros book.

Suggested links for further research about this character and the character's religious affiliation:
- http://www.adherents.com/lit/comics/Argent.html
- http://www.comicvine.com/argent/29-29994/
- http://comicbookdb.com/issue.php?ID=51771