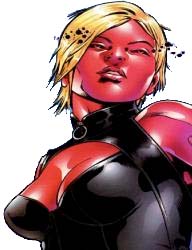 Ruby Summers is the daughter of Scott Summers ("Cyclops" of the X-Men) and Emma Frost in a possible/alternate future. She was first seen when she encountered Layla Miller, who had become stranded in a bleak future in which mutants were held captive in concentration camps. The "Summers Rebellion" of this future period of time refers to the rebellion led by Scott Summers' family (Ruby amnog them) against the oppressive rule and the Sentinels that kept mutants captive.