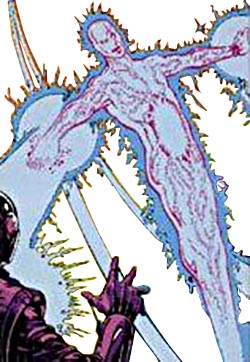 Killowat Quick Bio: Originally a soldier for Lord Chaos, Charlie Watkins realized the error of his ways during an accident with a bank of energy converters. Crackling with electricity, Charlie joined the Team Titans as Killowat! Killowat was erased from time during the Zero Hour time crisis.

Charlie Watkins was an ambitious young man that yearned to join Lord Chaos's Force Elite. Believing Chaos a god, Charlie could think of no greater honor. He was accepted and after much training, he attained the rank or corporal.

As he served the Force Elite, he became increasingly aware of Lord Chaos' true nature. Now disgusted at the master he served, he approached the Team Titans and offered to become a double agent. On a routine mission, things went awry. Charlie was exposed as a spy, and he fell into one of the energy converters. Instead of killing him, it transformed him into a being of electricity. He could now alter his body from normal human Charlie Watkins to an electrical avenger, Killowat. During that same mission, Team Titan Silver Shield died in battle. Now exposed as a traitor to Lord Chaos, Killowat offered to become a member of the Team Titans (in Silver Shield's honor) and was accepted.

Shortly thereafter, the Team Titans leader gave the team a mission: travel 10 years into the past to stop Chaos from ever being born. To accomplish this, the Teamers were assigned to kill Donna Troy before she would give birth to the child who would become Lord Chaos! The Teamers successfully traveled to the past and came into conflict with the Titans. Donna gave birth to her son before the Teamers could intervene. However, the Titans and the Team Titans were able to stop Chaos and spare Donna's life at the same time.

Charlie had an especially hard time adjusting to his new life. Complicating matters, he was very much in love with Mirage, who had no romantic interest in him.

Shortly after this, the Teamers lives were disrupted by the time crisis known as Zero Hour. It was then revealed that the Team Titans leader in the future was the villainous Monarch - who created a false future world so he could train meta-humans (The Team Titans) to act as sleeper agent assassins. He knew of the impending time crisis, and wanted a super-powered army at his command. The time-villain Extant commanded all the Team Titans to attack the heroes who were trying to unravel this time crisis. His plan was thwarted; the heroes contained the Teamers. Time continued to collapse, erasing the false timelines that had emerged. As a result, all the Team Titans were erased from existence.

The rest of the Team Titans, including Killowat, ceased to exist altogether. It is unknown whether some version of Killowat has or will exist in this timeline.

Charlie Watkins could will his body to turn into a form composed of pure electricity. This enables him to shoot electric blasts, fly and alter his electric form to various degrees.

Sources for this entry: DC Who's Who Binder Series, supplemented by titanstower.com

New Titans #79 [1991]: A mysterious group of teenagers try to track down Donna Troy in an attempt to kill her. This issue features the first appearance of the Team Titans. Story continued in New Titans Annual #7 [which establishes the back story of the Team Titans].

New Titans Annual #7 and New Titans #80 [1991]: Waverider leaves an unconscious Nightwing to meet Joe Wilson, while in the future, the mysterious leader details his plans to the Team Titans on how they will go back in time to eliminate Donna Troy before she can give birth to her son, who will turn out to be Lord Chaos.

Total Chaos: New Titans #90-92, Team Titans #1-3, Deathstroke #14-16 [1992]: The Team Titans have been sent to the past to kill the pregnant Troia before she gives birth to her son, who could become a god-powered dictator named Lord Chaos in the future. The Team is defeated, and Troia, having lost her powers, gives birth to a normal baby boy. Mirage of the Team Titans kidnaps Starfire and impersonates her so that she can date Nightwing. Team Titans #1 is released in five different versions, but unlike variant cover gimmicks, all five are double-sized while selling for the regular price. Although all contain a common story, each also includes a different full-length origin story for a group member [Origins of Mirage, Terra II, Nightrider, Redwing and Killowat].

Team Titans #6 [1993]: The Team Titans celebrate the holidays, by going in search of their pasts, here In the present. Phantasm eases Terra's and Mirage's pains. Both Titans teams unite for a holiday gathering.

Team Titans #24 [1994] FINAL ISSUE: Monarch rants about how the Teamers have been pawns all along and their true role will become apparent soon. The Teamers battle against all the havoc wrought by Zero Hour time glitches. Continued in the pages of Zero Hour.

From the letter column of TEAM TITANS #24:

"And speaking of the conflict between Mirage and Killowat, that plot line was one that should have been fleshed out a little more. Charlie's stunning display of political incorrectness in issue #15 was to have been the beginning of an on going storyline that would have both tracked the disintegration of the Mirage-Killowat relationship and- get this-an ambitious effort to examine institutionalized racism within American society. Lucky for our editors and for you, that storyline was put on hold, as the changes dictated by Zero Hour altered the direction of this comic. And honestly, if it wasn't Zero Hour, it would have been something-or someone else-that would have put an end to that storyline, if only because the way we would have approached it probably wouldn't have been appropriate for a mainstream super-hero comic book. That's not meant as a slight against our readership in any way, but a knock against ourselves for trying something we most likely couldn't have pulled off." 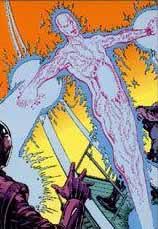 Suggested links for further research about this character:
- http://www.comicvine.com/killowat/29-9942/
- http://dc.wikia.com/wiki/Charles_Watkins_(Team_Titans)