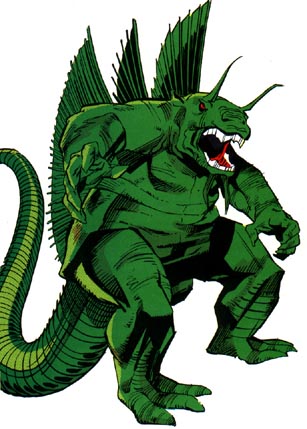 The Religious Affiliation of
Fafnir

There are two distinct Asgardian characters named Fafnir. This record is for Fafnir who was the evil king of Nastrond. (Another Fafnir was a Frost Giant.)

Fafnir, the king of Nastrond, was widely known for his tremendous evil. Fafnir led his people to rebel against Odin, the All-Father of the Asgardian gods and ruler of greater Asgard. As punishment for Fafnir's evil, Odin left him to die in the "cave of the Ancient" in Nastrond.

The properties of this pool mutated Fafnir (who originally had a normal human/Asgardian appearance) into a giant dragon. Fafnir, as a dragon, attempted to gain vengeance on Odin. Fafnir was defeated by Odin's son Thor and his ally Elif Dragonslayer.

These champions burned Fafnir's body. The villain's spirit was later used as an ally of Malekith against Thor.

"By Fafnir's Teeth" is an invocation commonly uttered by the villainous Asgardian sorceress-goddess known as the Enchantress. One example of this is was in Marvel Super-Heroes Secret Wars #6, but this is not the only time she has been seen invoking the name of this late evil god/dragon.

Fafnir the comic book character is based on an actual figure from Norse/Teutonic mythology who began as an humanoid Asgardian and became a dragon.