Malus graduated from UCLA and worked for a time with the Power Broker, experimenting on humans (not always successfully) and developing techniques for imbuing humans with super strength and other super powers.

One of the things Malus is best known for is developing the strength augmentation process that was used to empower so many individuals encountered by Captain America with "Class 10" strength (strength enough to lift approximately 10 tons). Unfortunately for many people who underwent the process, there is a high failure rate, and when the process fails, it leaves subjects permanently deformed or kills them.

Eventually Malus parted ways with the Power Broker and founded his own institution: the Institute for Supranormal Research.

Although best known for empowering people with super strength and other super-human powers, Malus has also developed weapons, such as those he designed for the Enforcer.

Among the many individuals empowered by Karl Malus are: Hornet (Scotty McDowell), Goliath, Armadillo, the second Ms. Marvel (Sharon Ventura), Bantum, Hammerhand, Coldfire, and numerous wrestlers in the Unlimited Class Wrestling Federation. On occasion, Malus used his scientific expertise to do the opposite. Daddy Longlegs, who had been mutated to have super-long legs, came to Malus to be cured of his condition. Malus was able to cure him (and kept some of his DNA and cell tissue for himself to experiment with).

For a time, Malus controlled Werewolf By Night.

Because of the danger and legally questionable nature of Malus's techniques, he tended to attract many less-than-honorable individuals, many of whom were outright criminals. But some of the people empowered by Malus turned out to be quite honorable, such as Sharon Ventura/Ms. Marvel (who joined the Fantastic Four for a time), John Walker (long-time Avenger U.S. Agent) and Lemar Hoskins (Battlestar). 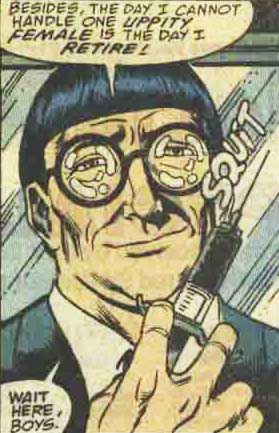