The Religious Affiliation of
Kilg%re

Enemy of: The Flash

Kilg%re is one of the villains who escaped from the Slab when the Joker escaped along with all of the other super-villains incarcerated there. Kilg%re was going on a rampage (as were all the other villains, in various parts of the country). The hero known as Militia took on Kilg%re. After hitting the villain with a special grenade that "fires off a localized electromagnetic pulse charge," Militia moved in closer. With bravado typical for the brash hero, Militia said (referring to the grenade), "Looks like it ruined Killbore's day." This comment made in panel 2 on page 11 in Joker: Last Laugh #4 (Dec. 2001). This is on page 109 in the Joker: Last Laugh trade paperback.

"Killbore" is simply a derisive diminutive name used by Militia to refer to Kilg%re. An indexer at ComicBookDB.com (an excellent resource, by the way) misinterpreted Militia's statement and listed "Kilbore" as a separate character who "first appeared" in this issue. 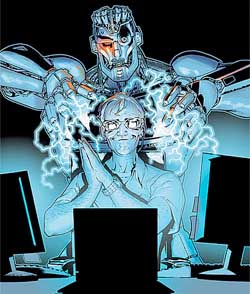