The Religious Affiliation of
Nick Fury

BELOW: Thor feels that Nick Fury is going to great lengths to rationalize rather than accept the facts of Thor's and Loki's existence. Thor gently chides Nick Fury for his inability to believe that Thor is a god and that Loki has just appeared before them in the form of somebody else. Nick Fury's secular mindset simply can't allow for such possibilities. Thor tells Fury: "I know what I know." Fury's disbelief will not dissuade Thor from his convictions.

Thor spread his hands. "General. After all we've seen in this past year, you still think it's crazy to believe in shapeshifters?"

Fury glared daggers at him.

"And the truth is, I don't care about what you think where my mental stability is concerned. I know what I know. However you want to rationalize it to yourself is fine."

"Oh," Fury said. "You're going to lecture me about rationalizing? Let me get out my tape recorder."

"General Fury," Thor said. "That was Loki... If you need to think I'm crazy because that's the way your world makes sense to you, be my guest," Thor said. "But this happened. And what needs to happen now is..."

BELOW: Nick Fury is not comfortable citing the "Norse thunder god" as a source of information:

"Okay," Fury said. "Let' say I believe you. How do you suggest I explain to the congressional inquiry that I knew I had to do it because of the word of the Norse thunder god?"

Thor put away his smile. "Is that the worst problem you can think of?" 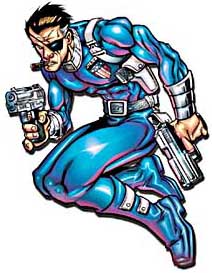 This character is in the following 620 stories which have been indexed by this website:

Sgt. Fury and His Howling Commandos