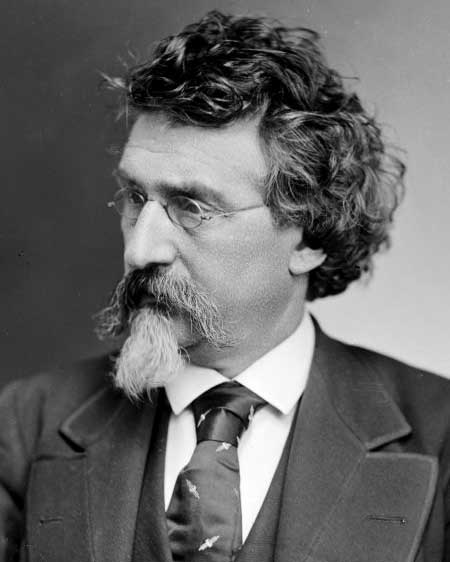 Matthew Brady is regarded as the father of photojournalism. He is mentioned in "Museum of Mixed-Up Men!" in Detective Comics #331 (Sep. 1964). He even has a sort of "cameo appearance" by virtue of the fact that a wax dummy meant to look like him appears in the story.

On page 2 in this story, Bruce Wayne (who is secretly Batman) is touring the museum established by the Alfred Foundation, a memorial foundation dedicated to Wayne's butler Alfred, who recently died (or so everybody thinks). In panel 2 on page 2, the narrative caption reads: "He [Bruce Wayne] pauses before the Matthew Brady Photography Exhibit, dedicated to the first great American photographer."

Bruce Wayne tells a uniformed museum worker, "Since part of the museum is self-supporting, I'll contribute a dollar to have mypicture taken as a souvenir!"

The museum worker tells him, "Go right in, Mr. Wayne."

The narrative caption in panel 3 reads, "On the other side of the dark curtains he finds a Nineteenth Century picture salon . . ."

Bruce Wayne thinks to himself, "I'm supposed to put my head in the clamps just as Brady's patrons usd to do, then take my picture with a remote-control attachment."

In panel 4 the narrative caption reads: "As his thumb presses the activator for the wax-Matthew Brady and his special camera, the camera lens glows . . ."

Some villainous person (later revealed to be "Boss" Barron) has installed peculiar equipment in the exhibit. The light of the camera actually changes the appearance of Bruce Wayne's face and causes him to temporarily forget who he is.

So the actual Matthew Brady (who died in 1896) does not appear in this story, but a wax replica of him appears. The face on the wax replica is never actually seen. The life-size wax replica has his head buried under the tarp of the 19th Century camera in the museum exhibit.

Matthew Brady's name is mentioned throughout the rest of the story in relation to the Matthew Brady exhibit in the Alfred Foundation museum. The story focuses on strange things that take place there, due to "Boss" Barron's equipment.

For example, in panel 5 on page 10, a recovered Batman tells Robin, ". . . and the last thing I recall before blacking out was walking into the Matthew Brady exhibit in the wax museum! Next thing I knew I was standing beside the batmobile parked near the Emerald Emporium . . ."

Ralph Dibny (the Elongated Man) and his wife Sue visit the same wax museum in this story and also discuss the Matthew Brady exhibit.

A major scene takes place when Batman, Robin, and the Elongated Man all converge on the Matthew Brady exhibit in order to determine what is happening there that has led to identity thefts and bouts of amnesia.

Suggested links for further research about this character:
- http://en.wikipedia.org/wiki/Mathew_Brady