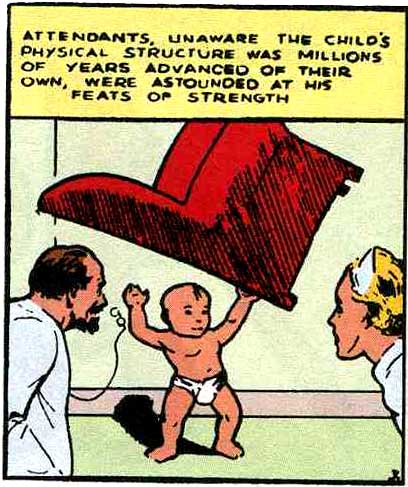 Note: cared for Superman as infant in orphanage

By appearing in the third panel of the first Superman story ever published, two unnamed orphanage attendants became the very first "guest characters" to appear in any Superman story and, by extension, in any modern super-hero comic.

These two attendants represented the orphanage workers who cared for the infant Kal-El when he first arrived on Earth. As the story was originally told, a passing motorist found the infant in a space-ship but quickly turned the child over to an orphanage.

Later re-tellings of Superman's origin fleshed out this original 1-page account by explaining that the motorists who found the baby were Jonathan and Martha Kent, and that they adopted the infant soon after bringing him to the orphanage. But in Superman's earliest appearance, the only thing readers knew was that he had been cared for at an orphanage. The two attendants depicted were a man and a woman. The man was portly, had brown hair, a beard and moustache, and wore glasses on a slim chain. The woman was slim, blonde, and wore a nurse's cap.

The attendants, this story tells us, were astounded at the baby Clark Kent's feats of strength. They are depicted staring at an infant who must be only about 1-year-old (or less) standing wearing only a diaper. The infant is standing up while holding a heavy plush chair above his head with one hand.

Here are the exact words that begin this first-ever Superman story:

[panel 1] As a distant planet was destroyed by old age, a scientist placed his infant son within a hastily devised space-ship, launching it toward Earth!

[panel 2] When the vehicle landed on Earth, a passing motorist, discovering the sleeping babe within, turned the child over to an orphanage.

[panel 3] Attendants, unaware the child's physical structure was millions of years advanced of their own, were astounded at his feats of strength.

It would appear that the religious affiliation of the orphanage attendants is completely indeterminate. Although many orphanages had been created by religious groups, state and federal had accelerated by the mid-1930s and government-run orphanages were common. There is no religious sponsorship suggested for the orphanage that baby Kal-El was taken to. The orphanage attendants in Action Comics #1 have no spoken lines, wear nothing that is religiously distinctive and are not even named. Unless these particular attendants were later fleshed out considerably in subsequent re-tellings, it seems likely that their nothing further can be known about them. We are not aware of any such subsequent depictions of these briefly seen characters. Furthermore, it is increasingly unlikely that these attendants will be fleshed out because their role in Superman's early life been increasingly minimized as responsibility for raising young Clark Kent has shifted almost entirely to Ma and Pa Kent. In Smallville's version of Clark Kent's infancy, the orphanage attendants seem to have been eliminated entirely by making the "orphanage" a paper-only creation of Lionel Luthor. The comics long told us that baby Kryptonian spent at least some time in an orphanage before being retrieved by the Kents. But even that minimal time in an orphanage seems in doubt in modern accounts. The end result is that the "definitive" depiction of Superman's orphanage attendants may forever remain a single panel in Superman's 1938 debut.

The narrative text for this panel reads: "The infant was turned over to an orphan asylum, where it astounded the attendants with its feats of strength."

If we consider the "unnamed orphanage attendants" as a collective group, Superman #1 can be regarded as their second appearance, although this issue clearly depicted a different person than either of the two attendants in Action Comics #1.