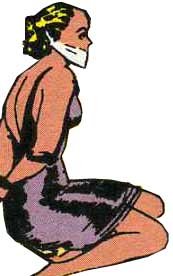 The Religious Affiliation of
Bea Carroll

Other Names: "the real murderess"

Who was the first-ever villain in a Superman comic? It was definitely not Superman's arch-enemy, Lex Luthor, who didn't even appear until Action Comics #23 (April 1940). It wasn't even Butch Matson, the first named villain Superman ever faced. No the first-ever Superman villain was an unnamed murderess caught, bound and gagged by the hero and delivered to the governor's mansion.

This story was later reprinted in Superman #1 (Summer 1939) along with 4 new pages that further fleshed out the story of the murderess and finally gave her a name: Bea Carroll.

Originally, the murderess appeared only in two panels: panels 10 and 11, as labeled by Siegel and Shuster themselves. These panels were on page 2 of the inaugural Superman story, immediately following the 1-page account of Superman's origin.

The murderess is an attractive blonde woman. She is seen wearing an elegant pink dress. Her hands are already bound and her mouth gagged as she is carried by Superman, using his astounding ability to leap 1/8th mile in a single bound. Superman leaves the bound woman fearfully kneeling on the grounds of the governor's estate, telling her, "Make yourself comfortable! I haven't time to attend to it."

Superman proceeds to bust into the governor's mansion. Superman convinces the governor to halt the impending execution of Evelyn Curry, the woman wrongly accused of the murder. Having saved Curry's life, Superman quickly leaves. But he left a note for the governor, which explains: "You'll find the real murderess bound and delivered on the lawn of your estate."

Hopefully the "real murderess" did not stand up and run away while Superman was inside the governor's mansion.

Nothing more was revealed about the murderess in Action Comics #1. The rest of this initial Superman story focuses on Clark Kent and Lois Lane and other villains they confront. All that was known as that the yet-unnamed woman murdered a man and almost got away with it because Evelyn Curry was wrongly arrested and convicted of the murder. Why did this unnamed woman kill a man? The reason was originally unrevealed. Whatever the reason, it was clear that in the aftermath, she was willing to let an innocent woman be executed for her crime. The unnamed murderess clearly had disregard for her initial victim as well as for Evelyn Curry. The real murderess apparently thought only of herself. Superman himself seems to have sensed her evil nature and treated her with considerable derision, despite his generally congenial nature. We will never know details about the murderess's religious upbringing (or lack thereof), but at the time of this story, she is manifestly non-religious.

With the new pages added to this story in Superman #1 readers learned that the man the murderess killed was a labor leader named "Jack Kennedy." U.S. President John F. Kennedy was commonly known as "Jack Kennedy," but this Superman story was published when the would-be President was only 22 years old, so there is no reason to believe there is any connection between the real-life Commander-in-Chief and the fictional murder victim.

In the new pages readers also learned the name of the murderess: Bea Carroll. She was identified as a "singer at the Hilow Night Club."

Bea Carroll was Jack Kennedy's mistress. She murdered him for being unfaithful to her. So Bea Carroll's murder appears to have no ideological or philosophical motivations. She was simply a woman scorned, lashing out from one of the oldest motivations known. Bea Carroll's murder is the epitome of animal-like behavior, reminiscent of other animals that kill fellow members of their own species in order to protect their own genetic line and eliminate competition. Bea Carroll seems to be a woman uninfluenced by the civilizing ideals that separate humans from beasts.

Clark Kent confronted the lounge singer in her dressing room in his his costumed Superman identity. Bea Carroll, who was clearly a violence-prone woman, immediately tried to kill him with a gun. Superman easily crushed the gun. He then grabbed her arm, squeezing it until she cried out in pain. Bea Carroll confessed to the murder just as Superman hears a radio news report announce the execution of Evelyn Curry within a half hour. This leads into the originally-printed portion of this story, in which Superman lifts Bea Carroll in his arms and leaps to the governor's mansion.

The additional four pages fill in details about how Superman came to know Bea Carroll was the killer. This new material also reinforces the assessment one could make from the original shortened version: Bea Carroll was a violent, self-serving, murderous woman. This story even reveals that Bea Carroll intentionally framed Evelyn Curry for the murder.

In addition to the reprint with new pages in Superman #1, the story of Superman and Bea Carroll was retold in Secret Origins (vol. 2) #1 (Apr. 1986).

BELOW: Superman brings Bea Carroll to the governor's mansion. She murdered a man but another woman was about to be executed for the crime. 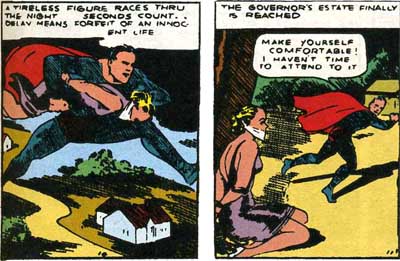 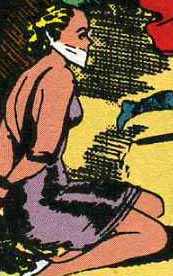