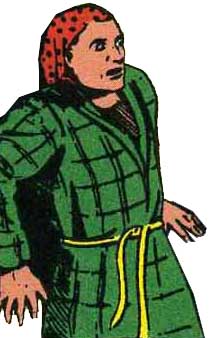 An unnamed butler can be considered one of the first "guest characters" ever to appear in any Superman comic. This butler appears in 13 panels on pages 2, 3 and 4 of the inaugural Superman story in Action Comics #1 (June 1938).

When the as-yet unknown super-hero Superman arrived at governor's mansion to put a halt to the execution of a wrongfully-convicted, he encountered the governor's butler. It was almost midnight, the time appointed for the execution, so the butler was understandably unwilling to allow the strangely garbed Superman in to see the governor. But Superman broke down the mansion's front door and carried the butler up the stairs. The butler was very loyal to the governor, clearly willing to risk his own safety to protect the master of the house. Superman broke through the steel door of the governor's sleeping room and delivered a signed confession from the real murderer.

The butler, however, didn't realize that Superman's intentions were purely noble. The butler returned with a revolver and tried to hold Superman at bay. It is worth noting that the butler did not immediately shoot Superman. The butler twice instructed the intruder to surrender. But Superman continued to shout orders and approach the butler in what must have seemed a very menacing manner. Finally the butler felt he had no choice and he shot Superman.

The super-hero was unhurt, of course, and simply grabbed the gun away after the bullet ricocheted off his "tough skin." Although the butler technically opposed Superman in this story, he was no villain, and Superman did nothing to retaliate against the servant for shooting him.

After the governor quickly called the penitentiary to halt the wrongful execution, Superman quickly left, his goal accomplished. The butler by now seems to have realized what was really going on. He brought Superman's note to the governor and read it aloud. The note explained that the real murderess was bound and delivered on the lawn of the estate.

This was the last time that this butler was seen. Despite being the first character ever seen fighting Superman, the butler was in no way a villain. He was clearly a man of great loyalty and courage. His willingness to shoot Superman to protect the governor makes it clear that the butler was not a pacifist. Yet, the butler was not a violent man. He had clear cause for shooting an intruder who menaced the his boss, who was also the duly elected leader of the state. Yet, still, he was reluctant to shoot anybody unless absolutely necessary.

These are the scant few details about the butler's virtues and characteristics that can be gleaned from his encounter with Superman. With so few details known, the butler's precise denominational or religious affilation is indeterminate.

Suggested links for further research about this character:
- https://www.comics.org/issue/293/
- http://comicbookdb.com/issue.php?ID=95