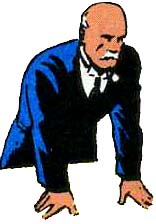 The Religious Affiliation of
unnamed governor

An unnamed governor was one of the first supporting characters ever to appear in a Superman comic. In Superman's very first published adventure, he delivered a murderess to the governor's estate and broke into the governor's mansion. After rousing the state's governor from his slumber, Superman showed the elected official a confession signed by the real murderess of the man Evelyn Curry was wrongfully convicted of killing. Superman told the governor that he alone could save Ms. Curry. Despite the bizarre sight of this as-yet unknown super-hero barging into his bedroom, the governor was wiling to look at he papers Superman presented him. Fortunately, the governor believed Superman's story and paper, called the penitentiary, and put a halt to the execution with just minutes to spare.

The governor displayed an impressive degree of humility and open-mindedness in his willingness to consider Superman's plea. One should remember that this was Superman's very first public appearance. Nobody had yet heard of him, so the governor could not rely on Superman's reputation. The governor also showed compassion in his quick call to halt the execution and grant an immediate pardon to Evelyn Curry.

The next day, the governor called a meeting of his senior staff and told them: "Gentlemen, I still can't believe my senses. He's not human! Thank Heaven he's apparently on the side of law and order!

At least this is the case if we utilize only the information available in this story. But a good case has been made that the "unnamed governor" in this story is actually meant to be George White. When Action Comics #1 was published in 1838, created by Cleveland, Ohio residents Siegel and Shuster, George White had recently been the governor of Ohio for many years.