The Religious Affiliation of
unnamed clergyman

An unnamed Christian clergyman appeared in the very first Superman comic ever published.

It is well known that the genre-creating super-hero Superman (a.k.a. Clark Kent) first appeared in Action Comics #1 (June 1938). Many people only casually acquainted with super-hero comics incorrectly believe that religious themes and religious characters are absent from the super-hero genre. The truth is that religious characters have been a part of super-hero comics literally from the beginning of the genre. In Action Comics #1, a Christian clergyman appears in panel 4 on page 4. We can even identify this as panel #29 of this first Superman story, because Siegel and Shuster actually numbered every panel sequentially in this story. (The genre was so new they were worried people might not know what in what order the panels should be read.)

The unnamed Christian clergyman wears a white skull cap, a white robe, and a large simple Christian cross on a necklace. He appears to be a Catholic or Episcopalian priest. But it may be impossible to determine precisely which denomination he was meant to represent. Siegel and Shuster, who were both Jewish, may have simply intended him to represent a Christian prison chaplains, without thinking in depth about his denominational origin.

The Christian clergyman has apparently been counseling Evelyn Curry, a woman wrongfully convicted of murder who has been on death row awaiting execution. In this first-ever Superman story, Superman brings a signed confession from the real murderess to the state's governor, who calls the penitentiary to halt the execution and pardon Ms. Curry. Evelyn kneels humbly on the floor and grasps the clergyman's robe, exclaiming: "Thank God! I told you I was innocent!"

In this panel, Evelyn appears to be speaking directly to the clergymen, suggesting that she had told him that she was innocent. Her kneeling in front of him and grasping his robe further suggests that there is an established degree of familiarity between them. Now that she has been saved from death just minutes before her scheduled execution, Evelyn believes she is the recipient of a veritable miracle. She thanks God and the clergyman who has stood by her side with a single utterance and gesture. 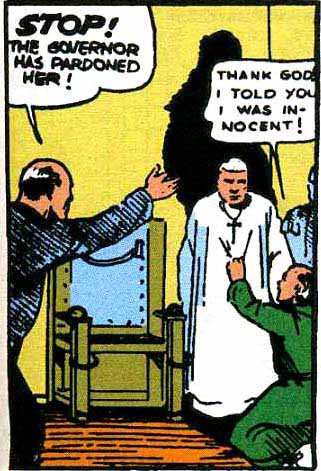