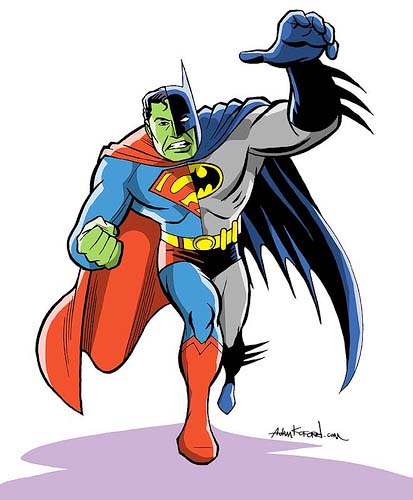 Details from now-defunct webpage at http://supermanica.superman.nu/wiki/index.php/Composite_Superman:

A ruthless, power-hungry villain—endowed with all the super-powers of Superman as well as with all the extraordinary powers of the Legion of Super-Heroes—who sets out, in June 1964, to "use [his] unmatchable powers to humiliate Superman and Batman before the world, and end their careers forever," as the first phase of his plan to conquer Earth and other worlds as well.

The Composite Superman is in reality Joe Meach, the caretaker of the Superman Museum in Metropolis, a onetime high-diver, embittered by his failure to achieve fame and fortune, who received his museum job from Superman after the Man of Steel had rescued him from a dive off a tall building into an inch-deep pool of water that would certainly have caused his death, but who nevertheless feels that "Superman humiliated me, by making me a lowly sweeper!"

As the Composite Superman, Meach—who acquires his unbelievable multiplicity of powers when a fateful bolt of lightning strikes a metal table in the museum containing lifelike statues of the Legion of Super-Heroes—has green skin, but otherwise resembles a weird composite of Superman and Batman, as though one half of his body were Superman's and the other half Batman's, divided vertically down the middle. By employing his seemingly endless arsenal of super-powers, the Composite Superman is able to humiliate Batman, Robin and Superman, and even defeat them. Ultimately, however, Meach’s powers fade and vanish, leaving him with no recollection of his short-lived career as a super-villain (WF No. 142: "The Origin of the Composite Superman!" pts I-II—"The Composite Superman!"; "The Battle Between Titans!"). (TGSB)

By August 1967, Joe Meach is a changed man. Having apparently defeated his inner demons, he now regards his former enemies with admiration ("To think I used to envy those heroes. Superman...Batman! But that's all changed now! Working has made me realize what fine men they are!"). Events conspire against Joe, however, as an alien named Xan creates an artificial lightning bolt that once again strikes the Legion statuettes, returning Meach to his Composite Superman form and restoring his old hatred and mental instability. Xan intends to use the half-and-half villain as a weapon of vengeance against the heroes, in retaliation for their incarceration of Xan's father, now deceased.

This time around, the Composite Superman gets straight to business and begins a physical assault on Superman and Batman. After a humiliating round one defeat in the Batcave, the heroes begin investigating the origins of their foe; Batman confirms the villain's true identity while Superman travels to the 30th Century to consult Brainiac 5, who confirms that the device which had been used on the living forms of the Legionnaires to produce their miniature, lifeless replicas had also somehow stored their powers in those same statues. When lightning strikes the statues, it somehow releases those powers and transfers them to Meach. Returning to the 20th Century, Superman destroys the statuettes to prevent Meach from ever using them again.

Meanwhile, the Composite Superman has captured Batman and Robin and set a trap for Superman. In a prolonged, spectacular battle, he defeats the Man of Steel, and with both heroes at his mercy, is on the verge of destroying them with an anti-matter ray when the alien Xan arrives on the scene. Reserving the privilege of delivering the fatal blow to the heroes himself, Xan returns the Composite Superman to his Joe Meach form to remove his interference. As Meach's powers fade, so does his hatred of the heroes, and in a final act of heroic self-sacrifice he absorbs the raygun blast that would have killed them. In gratitude, Superman and Batman erect a statue in honor of Meach, with an inscription at the base reading, "Joe Meach: He lived a criminal, but died a hero" (WF No. 168: "The Return of the Composite Superman!", pt II; "The Half-And-Half Heroes!").

Much later, Xan returns and assumes the powers of the Composite Superman, eventually calling himself Amalgamax. Superman and Batman need the help of the Legion of Super-Heroes to defeat him (WF No. 283, Sep 1982: "Prologue"; WF No. 284, Oct 1982: "I - Amalgamax").

Suggested links for further research about this character:
- http://en.wikipedia.org/wiki/Composite_Superman
- http://www.comicvine.com/composite-superman/29-45936/