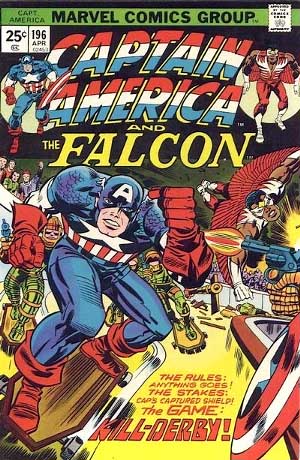 The Religious Affiliation of
The Imperial Forces of America

Name: The Imperial Forces of America

Other Names: The Royalist Forces of America; The Imperial Forces

Enemy of: The Thunderbolts

The Royalist Forces of America sought to overthrow the United States government so that they could replace it with leaders drawn from the ranks of wealthy, elite individuals of British ancestry or British birth. They wanted to establish a government based on pre-Revolutionary War British aristocracy.

In addition to ruling members, the Royalist Forces also included large numbers of troops, as well as slaves and genetically engineered monsters or monstrously deformed individuals.

Moreover, the Royalist Forces of America's presence in issue #193 is far more prominent than simply appearing in a one-panel cameo. The entire issue focuses on this group's campaign against America. The first 9 pages focus on a Madbomb attack on New York City, an attack that Captain America and the Falcon find themselves in the middle of. On page 10, in the aftermath of this attack, a SHIELD agent contacts Captain America and Falcon and escorts them to a specially-created SHIELD base in the American West, a base the accompanying SHIELD agent identifies as "Madbomb Control." Clearly the Royalist Forces are important in this story - so important that SHIELD set up a remote base just to deal with them. Agents at the base are hard at work looking for the hidden Royalist Forces base, which is where they believe the Madbombs are being created.

After a few pages in which SHIELD forces put Captain America and the Falcon through a dangerous sort of obstacle course to test their readiness and verify their identities, the heroes are introduced to the United States Secretary of State himself: Henry Kissinger. This is not just a cameo appearance by this real-life Secretary of State. Kissinger is featured throughout four pages, delivering explanations and exposition about the Madbombs and the plans of the Royalist Forces of America to detonate a huge Madbomb on the first day of the country's Bicentennial year (1976).

The fact that the Secretary of State himself would be on location at the "Madbomb Control" base underscores how dire this threat is, and how important the mission is. Captain America and the Falcon are definitely not the only people working on this mission. SHIELD and other federal forces are focused on trying to find the Royalist Forces and stop them. The SHIELD agent who accompanies Captain America and the Falcon to the Madbomb Control base tells the heroes that "every available SHIELD agent is on this cae, but we're still batting zero..."