The Religious Affiliation of
Thakorr

Emperor Thakorr was the ruler of the Atlantean undersea empire. The late Thakorr is the father of Fen, who is the mother of Namor, the famed Sub-Mariner. Thus, Thakorr is Namor's grandfather. Thakorr is also the grandfather of Byrrah, one of Namor's greatest foes.

The Antarctic Atlantean city Thakorr was founded by Thakorr and (obviously) named after him. The city was destroyed by Paul Destine. Destine also destroyed the city of Atlantis. Destine killed Destine, because Thakorr himself died during the destruction of Atlantis. 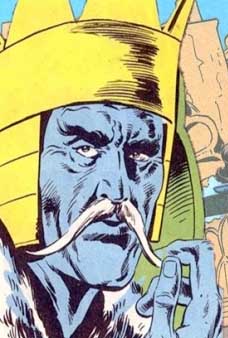