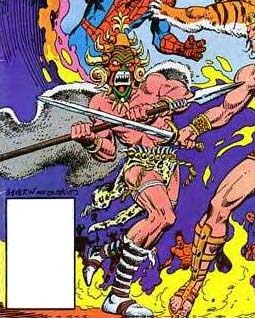 The Religious Affiliation of
Ju-Lak

Ju-Lak was a Pictish shaman who lived in the pre-Cataclysmic era. He was in possession of a potion that saved a Spider-Man (who was time-traveling at the time) from the poisonous bite of a Serpent Man.

Before Spider-Man could obtain the potion, the shaman captured Spider-Man's spirit and took the hero's powers. Ju-Lak did this in an effort to kill his enemy, the noble King Kull. Spider-Man worked with Kull to defeat Ju-Lak. Spider-Man and Kull then forced Ju-Lak to turn over the potion to that Spider-Man could be cured from the effects of the bite.