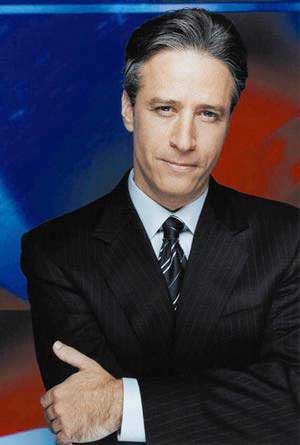 The Religious Affiliation of
Jon Stewart

Jon Stewart is the host of the popular "Daily Show" progam on the Comedy Central cable network. An animated version of Jon Stewart has a cameo appearance in the Superman/Batman: Public Enemies film (2009). One minute after the beginning of the film, the concept that Lex Luthor himself is running for President (and gaining in the polls) is introduced by Jon Stewart on his "Daily Show" program. (For legal reasons, the program is called "The Weekly Show" in this film.)

Jon Stewart delivers the following news followed by a joke: "Lex Luthor's attempt to win the Presidency the old fashioned way - by buying it - seems to be picking up steam. New polls show that 22% of Americans now support his third party bid. In a completely unrelated story, 22% of Americans now indicate a preference for getting [BEEP] in the [BEEP] with a red hot poker."

Were the censorship beeps not obscuring the words that Jon Stewart said, his joke would suggest that the people who plan to vote for Lex Luthor and his promises of change are the type of people who prefer to be violated in their posterior orifice.

In this film, despite Jon Stewart's obvious disdain for the candidate, Lex Luthor does indeed win the Presidency.

Jon Stewat's animated cameo appearance in this film is only about twenty seconds long. It does not sound as if the real-life Jon Stewart provided the voice for the animated look-alike Jon Stewart, host of the "The Weekly Show." 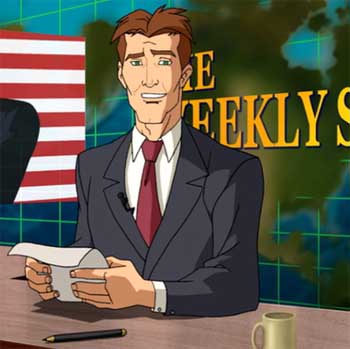 Suggested links for further research about this character and the character's religious affiliation:
- http://en.wikipedia.org/wiki/Jon_Stewart
- http://www.imdb.com/name/nm0829537/