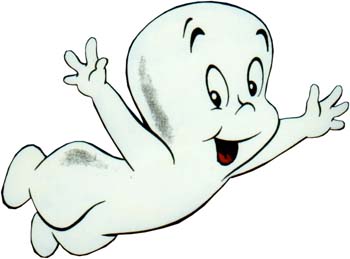 The Religious Affiliation of
Casper the Friendly Ghost
Casper McFadden

Other Names: Casper; The Friendly Ghost; Casper on Screen

According to some sources, the character Casper the Friendly Ghost was created by Seymour Reit and Joe Oriolo. Their friendly ghost character was featured in a children's book titled The Friendly Ghost published in 1939 and a same-titled animated film in 1945.

Yet the IMDb.com (Internet Movie Database) listing for the Casper character lists his first film as being the animated silent short film Fooling Casper, which was directed by Earl Montgomery. Casper's part was played by actor Bud Duncan. This film was released in 1928, a full eleven years before the Reit/Oriolo book was published. This character named Casper was featured in at least 12 animated short films released in 1928 and 1928, according to IMDb.com. In all of these, Bud Duncan played Casper. In looking a little more closely at these, it seems that this is a different "Casper." The Casper portrayed by actor Bud Duncan was one of the main characters in a series of "Toot and Casper" comedy films. Casper was the husband in a comedic husband and wife duo. IMDb.com's charater page for Casper the Friendly Ghost simply includes this other "Casper" erroneously. The "Toot and Casper" films weren't even animated.