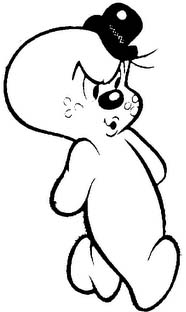 The Religious Affiliation of
Spooky

The "The New Casper Cartoon Show" animated TV show ran from 1963 to 1969. This series had 26 episodes. The 1996 animated TV series "Casper" ran for at least 20 episodes, from 1996 to 1998. Actor Rob Paulson provided the voice of Spooky in that series. If Spooky was featured in every episode in these two TV series, that would be a total of 46 TV episodes he appeared in. However, although Spooky was a prominent supporting character in these TV series, we are not yet certain that Spooky was in ever episode. So his actual number of TV appearances may be lower than this.

Spooky was also a supporting character in the animated direct-to-video feature-length film Casper's Haunted Christmas (2000). The character's voice was provided by actor Sam Vincent in that film.