Religion: humanist; portrayed alternatively as explicitly believing in God and as atheist

One good place to read about Reed Richards' theological beliefs is the story "The Father, the Son, and the Holy Spirit" in Marvel Double Shot #3 (March 2003). In this story, Reed Richards talks to his son Franklin about God (http://comics.org/details.lasso?id=277037).

In the MC2 future timeline, Reed Richards uses a robotic construction as his remotely controlled body. In this guise, he is known as "Big Brain," a member of the heroic Fantastic Five. "Big Brain" was created by Tom DeFalco and first appeared in What If (vol. 2) #105 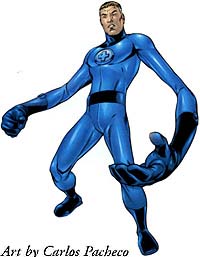