Comic strip character Beetle Bailey is best known as a lazy soldier in the U.S. Army. When the character first appeared in 1950, however, he was a college student. Beetle enrolled in the army in a strip that appeared on 13 March 1951.

Soon thereafter, Beetle's hot-tempered sergeant was introduced into the strip. In an article Brian Cronin wrote exploring this subject, Cronin states that Sarge Snorkel "definitely" appears in the 30 March 1951 strip (although the character is not yet identified by name and his appearance differs significantly from how the character was later drawn). Cronin suggests the commanding officer who appears in the 20 March 1951 strip may also be Sarge, saying: "But is this strip from March 20th also Sarge? I dunno, so I figured I'd give you both."

Examining the two strips, we believe that the officer in question seen in the March 20 and March 30 strips is intended to be same character. Both are drawn wearing identical uniforms, with an identical hat distinctive from what other characters in the strips are wearing. The facial features and slightly hefty build appear to be an attempt to draw the same person. We are concluding that the first appearance of Sarge Snorkel was in the "Beetle Bailey" strip that appeared in newspapers on 20 March 1951. 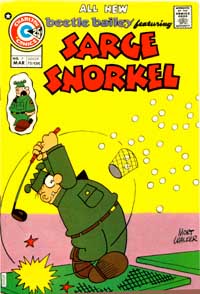