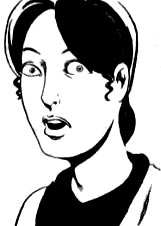 The Religious Affiliation of
Astoria

Astoria was named after famed actress Mary Astor. Commentators have speculated that Astoria was inspired in some ways by Deni Loubert, the ex-wife of the character's creator, writer/artist Dave Sim. In Cerebus #298, Sim said this was not the case. Nevertheless, there are similarities between Sim's ex-wife and this character, the most prominent female character in the long-running Cerebus comic book series.