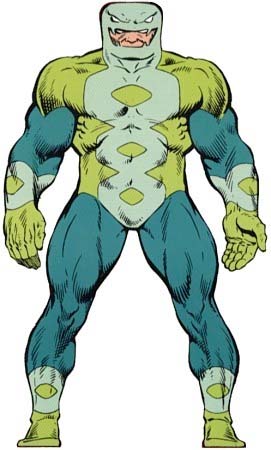 This may seem strange, but Puff Adder is sometimes depicted as a Caucasian, although he is usually depicted as black.

King Cobra (Rattler's boss in the Serpent Society) appears to call Rattler by the name "Willard" in panel 2 on page 11 in Captain America (vol. 1) #434. Rattler appears in costume on the cover in this issue, and he is apparently the uncostumed white man with close-cropped blonde hair who appears with King Cobra on pages 7, 11, 12, 13 and 22 in this issue. On page 11 in this issue, this blonde member of King Cobra's Serpent Society is flying his team's helicopter when he tells King Cobra what he thinks they should do with their captive, Jack Flag: "I saw we just give him the boot at 6000 feet. I got a hunch he's nothing but trouble."

King Cobra replies: "Might I remind you that you were nothing but trouble when we recruited you, Willard?"

Guardians of the Galaxy