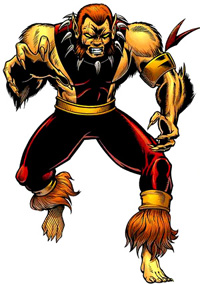 Worked for: The Rose

Thomas Fireheart is the guardian of his tribe, the protector of his people. He is also the Puma. Fireheart belongs to a Native American nation whose legends foretold that a being of near-infinite power would threaten the world. In an effort to protect their people, the tribal shamans began a secret program that combined magic and controlled breeding. They produced a line of warriors, of which Fireheart is the latest member.

Fireheart was bred with the ability to transform himself into a superpowered being, half-human and half-puma. While still a child, he started a lifelong course of training to perfect his enhanced powers. He studied martial arts, and honed his ability to transform. Believing that his tribe also needed economic power, he formed Fireheart Enterprises and built it into a huge multinational corporation.

To keep his warrior skills sharp, Fireheart occasionally accepted dangerous mercenary assignments. His talents eventually came to the attention of the Rose, one of Kingpin's lieutenants, who hired the Puma to capture Spider-Man.

Though they first met as enemies, Fireheart and Spider-Man have slowly gained a respect for each other. Fireheart paid for Peter and Mary Jane's honeymoon, and also offered his former foe a job with Fireheart Enterprises. The Puma even owned the Daily Bugle for a brief time and began a campaign to improve Spider-Man's reputation.

When Fireheart triggers his transformation into the Puma, his size and weight increase. His eyes change color, fur spreads over his body, and all of his natural abilities are magnified to superhuman levels. The Puma's senses are so accurate that he can follow the scent of an individual in a city of millions. The Puma can lift approximately 12 tons under ordinary conditions. The Puma is not only stronger than Spider-Man, his reflexes are also much faster. Even with his spider-sense warning of danger, the wall-crawler found it difficult to avoid Fireheart's first lightning-fast attacks.

During a battle with the mystical being called the Beyonder, Firheart achieved a state of total harmony with the universe and temporarily wielded near-infinite power.

[Quote from Puma's thoughts, shown in thought balloons, from a page in a Spider-Man comic:]
Now, comes the hard part . . . I must block out all physical and mental distractions! Must channel everything . . . all consciousness . . . the very essence of my being . . . into a single, heightened sense!