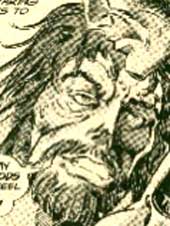 The Religious Affiliation of
King of the Ithacons

Name: King of the Ithacons

Other Names: Wayfinder's father; the King of Ithacon

Note: father of creator of the Microverse

Prince Wayfinder was a member of the human-like alien race known as the Ithacons, native of the planet Ithacon. He ultimately became the creator of the Microverse and one of the most important figures in Microverse religion.

Before all that happened, Prince Wayfinder was the son of the king of the Ithacons. The King of the Ithacons - Wayfinder's father - had been given a prophecy about his own future. The prophecy foretold that after he died, there would not be another ruler of Ithacon.

The Ithacons had long been at war with the Haamin. When the Haamin attacked the Ithacons yet again, the King was mortally wounded. Dying, he finally told his son Prince Wayfinder of the prophecy and told him of his destiny, involving the Sword in the Star. Like other orthodox adherents of Ithacon religion, the King worshipped the Sword in the Star.

The King died and Prince Wayfinder embarked on the path that would lead to him eventually merging with the immense power in the Sword in the Star and using it to create the MIcroverse.

Wayfinder's father was a mortal man, and remains mostly forgotten. But he is the father of the man who would essentially become the creator god of the Microverse. Thus, his role in Microverse religion and cosmogony is significant.