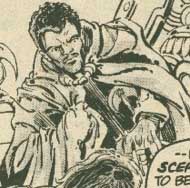 The Religious Affiliation of
Delphos

Delphos was the advisor to the king of Ithacon. Through advanced science, Delphos had lived over 10,000 years. He was old enough to remember the mass exodus from Earth that resulted in Earth humans spreading across the galaxy and diverging into different races.

Delphos was the advisor to the king of one divergent race, the Ithacons.

The Haamin, a bloodthirsty divergent human race that was intent on slaughtering all others, attacked the Ithacons and killed the King.

After the King died, Delphos took care of the king's son, Prince Wayfinder. Delphos mentored Wayfinder and taught him about the past of their people.

Eventually Delphos led Wayfinder to the starship "Star-Seed" and they departed from Ithacon. An attack by the Haamin left Delphos mortally wounded. He advised Wayfinder to find the Sword in the Star, but to "think before he used it."

Delphos had a base which contained many relics from the ancient Earth he had lived on.

Prince Wayfinder took the Star-Seed craft and returned to Earth, travelling through time to arrive a million years in the past.

Delphos was the creator of Alkinoos, the robot pilot of Star-Seed.