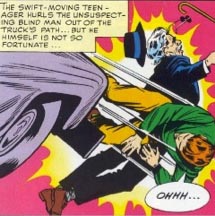 Defended or Helped by: Matt Murdock

A blind old man was directly connected to Matt Murdock becoming Daredevil. When Murdock was just a boy, he saved an old blind man who was crossing the street from being hit by a truck. Murdock pushed the blind man out of the way, but then he himself was hit by the truck.

The truck was carrying radioactive waste, some of which spilled onto Matt Murdock's eyes. The radiation blinded him, but also heightened his other senses. This is an integral part of Daredevil's origin story, and was chronicled in Daredevil (vol. 1) #1.

Many years later, Daredevil encountered a villainous serial killer named "Johnny Sockets," who turned out to be a woman named Maggie Farrell. After tracking down and defeating Farrell, Daredevil learned that she was the daughter of the old blind man he had saved when he (Matt) was just a boy. The blind man's abuse of his daughter Maggie was part of what led her to become a serial killer.

The old blind man's last name was NOT "Farrell." Maggie Farrell's last name as an adult came from Sean Farrell, her step-father.

The old blind man was deeply sorry about the damage he had done to his daughter. He recognized that his past actions were responsible for her becoming a serial killer. He wept and begged Daredevil for forgiveness, but hit was too late. Maggie was dead, shot by police who were trying to apprehend her. 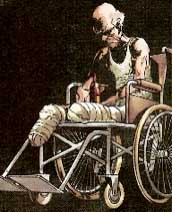