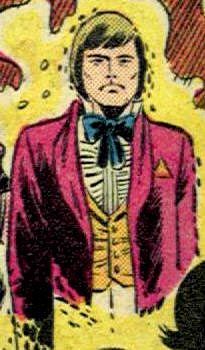 The Religious Affiliation of
Gideon Blaine

Note: 19th Century magician; sacrificed self to save Buck Cowan

When Gideon Blaine first appeared, he did not appear in his true form. He was a ghost inhabiting Marcosa House. Jack Russell and companions (including Buck Cowan and Topaz) came to Marcosa House to investigate paranormal phenomena there. Blaine appeared as the ghost of a Translyvanian peasant and claimed he was the spirit of the first person to become a werewolf under the familiar lycanthropy curse which Jack Russell inherited. At one point, Gideon Blaine's ghost even transformed into a werewolf and attacked Jack Russell and his friends.

Later the ghost of Gideon Blaine told them the truth about who he was - that he was a 19th Century magician whose beloved wife was killed by the evil and sadistic sorcerer Belaric Marcosa. In seeking vengeance, Gideon himself became one of Marcosa's many victims.