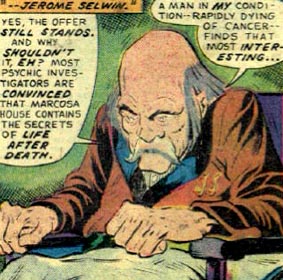 The Religious Affiliation of
Jerome Selwin

Jerome Selwin was a Los Angeles area millionaire who was dying. Desperate to find a way to revitalize is body, he hired a team of paranormal researchers to study Marcosa House to see if they could find an occult means to prolong his life. Marcosa House had been rumored to be a source of powerful magic and was thought to be a "haunted" house.

Elaine Marston and her husband Steven were on the team of researches that Selwin hired. Everybody on the team except Elaine was killed by the ghost of Belaric Marcosa when they went to Marcosa House to investigate. Later, Elaine returned to Marcosa House with new friends and allies, including Buck Cowan, Topaz and Jack Russell (Werewolf By Night).

Jerome Selwin believed that the secrets of life after death could be found in Marcosa House. Unfortunately for him, the researchers he paid to go to the Marcos House and uncover clues were unable to bring him the knowledge he craved. Many people died on Selwin's quest.

Ultimately, the dying Jerome Selwin was committed to an asylum.

Suggested links for further research about this character and the character's religious affiliation:
- http://www.marvunapp.com/Appendix/marcosab.htm#Selwin
- http://www.comicvine.com/werewolf-by-night-34-not-all-the-shades-of-death-n/4000-15709/