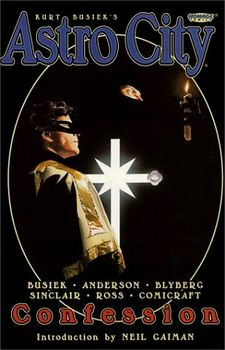 Cool clix they could make that might fit the bill could come from Astro City: The Confessor and Altar Boy would certainly apply. The Crossbreed might, although, I picture those guys more as non-denominational Christians.

Perhaps I should make a thread only about the comic or religious comics in general, but has anyone read Astro City: Confession? The main character is Altar Boy, the sidekick of the Confessor, who's Catholic. There's also a born-again bunch named the Crossbreed.

I always thought that the Confessor and Altar Boy were great superheroes that tied in heavily to Catholic religion... A priest who at the same time was a vampire was an interesting twist!!!

They really need to put Astro City's Confessor in there somewhere. If that's not religious, I don't know what is.

I mean he called his sidekick Altar Boy.