Moore did not simply ignore the events of the previous issues; he turned them into a central part of his Supreme storyline. Supreme discovered there had been many previous versions of himself. Retired Supremes lived in another reality, dubbed the "Supremacy" by its inhabitants, an afterlife for characters whose stories had come to an end. 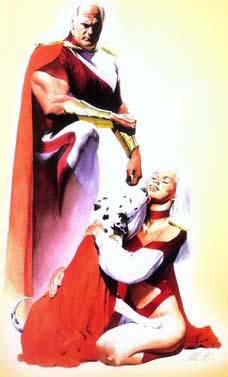 Suggested links for further research about this character and the character's religious affiliation:
- http://www.adherents.com/lit/comics/Supreme.html
- http://en.wikipedia.org/wiki/Supreme_(comics)
- http://www.comicvine.com/supreme/29-6538/