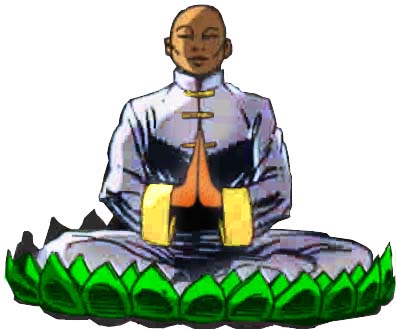 To keep this on topic (sorta), why are most heroes not as religious as they could be? ...the only really religious person that's sane that I recall in DCU is Huntress, and I guess Wonder Woman... Anyone else...?

Black Lightning is a Christian, I believe...

Then there's Maya, a Hindu, and wasn't Thunderlord a Buddhist?

Thunderlord is the name of a DC Comics superhero... Liang Xih-k'ai is a Buddhist monk who uses his voice like a soundwave. He helped the Black Canary dismantle a bomb on the island of Taiwan. Later on, he assisted the brothers Thunder and Lightning in Vietnam during the Crisis on Infinite Earths. Thunderlord joined the other Global Guardians as pawns of the Queen Bee. He remained loyal to the Queen until she was killed by the Justice League. Like the other brainwashed Global Guardians, Thunderlord rejoined the Global Guardians, but he died at the hands of Fain Y'onia.