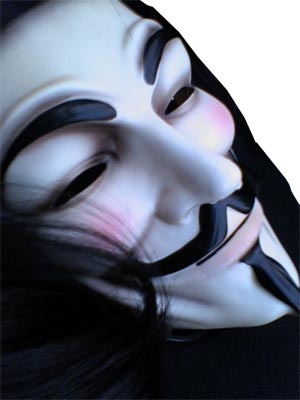 The Religious Affiliation of
V 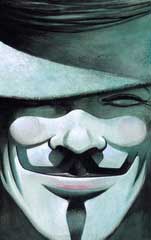 From: "The Religious Affiliation of Comic Book Character V: central character in V for Vendetta" forum discussion, started 15 May 2007 on the Adherents.com website (http://www.adherents.com/lit/comics/V_for_Vendetta.html; viewed 14 August 2007):

V is the the central character in the V for Vendetta comics, written by Alan Moore. V is an anarchist terrorist. Indeed, V's religious affiliation can best be described as "anarchist."

Anarchy (as a philosophy) does not always function as a religion, and many people who are self-described "anarchists" can be classified as having another, more traditionally recognized religious affiliation. But for V, anarchist philosophy is central to his character. This does not mean that "anarchy is a religion," per se. It means that for V, being an anarchist is his religion.

Suggested links for further research about this character and the character's religious affiliation:
- http://www.adherents.com/lit/comics/V_for_Vendetta.html
- http://www.comicvine.com/v/29-40407/