Commander Henderson is clearly incompetent and he and the crew of the HMS Camden Lock routinely fail in the missions they undertake on behalf of the British government of 2151. But Space Marshall Clarke seems too preoccupied with other interests to really care. Things that Clarke seems to give more thought to than Henderson's missions include such mundane things as a dinner party at his wife's sister's house, signing a birthday card for a co-worker, or saying hello to old friends.

Because they are old friends and school mates, Henderson routinely called Space Marshall Clarke by his first name ("Stewart"), which always annoys the Space Marshall, who invariably corrects Henderson and instructs his subordinate to use his correct title ("Space Marshall"). 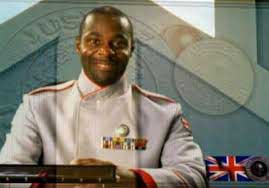