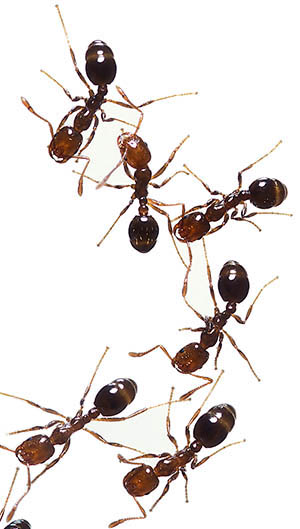 The Religious Affiliation of
ants

In the Bible, ants are clearly mentioned in Proverbs 6:6-8: "Go to the ant, thou sluggard; consider her ways, and be wise: Which having no guide, overseer, or ruler, Provideth her meat in the summer, and gathereth her food in the harvest."

The Book of Deuteronomy is almost certainly a considerably older book than Proverbs, and a few translations of Deuteronomy 28:56 refer to the ant, but most translations do NOT. We believe this reference to the ant is an attempt to translate an ancient idiomatic expression into contemporary English, but that the original writing does not actually refer to ants. The "God's Word" translation of Deuteronomy 28:56 reads as follows: "The most tender and sensitive woman among you -- so sensitive and tender that she wouldn't even step on an ant -- will become stingy toward the husband she loves or toward her own son or daughter."

In the King James Version of the Bible, this same passage is translated without mentioning ants: "The tender and delicate woman among you, which would not adventure to set the sole of her foot upon the ground for delicateness and tenderness, her eye shall be evil toward the husband of her bosom, and toward her son, and toward her daughter..."

The New International Version translates this passage as: "The most gentle and sensitive woman among you -- so sensitive and gentle that she would not venture to touch the ground with the sole of her foot -- will begrudge the husband she loves and her own son or daughter..."

Number of group members listed below: 11

Suggested links for further research about this character and the character's religious affiliation:
- http://en.wikipedia.org/wiki/Ant
- http://animals.nationalgeographic.com/animals/bugs/ant/