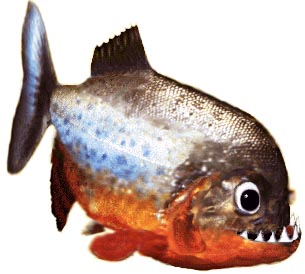 The Religious Affiliation of
piranha

Earliest Appearance Listed in This Database: Through the Brazilian Wilderness (1914)

American President Theodore Roosevelt presented piranhas as vicious creatures in his 1914 book Through the Brazilian Wilderness, indicating that:

They are the most ferocious fish in the world. Even the most formidable fish, the sharks or the barracudas, usually attack things smaller than themselves. But the piranhas habitually attack things much larger than themselves. They will snap a finger off a hand incautiously trailed in the water; they mutilate swimmers--in every river town in Paraguay there are men who have been thus mutilated; they will rend and devour alive any wounded man or beast; for blood in the water excites them to madness. They will tear wounded wild fowl to pieces; and bite off the tails of big fish as they grow exhausted when fighting after being hooked.

But the piranha is a short, deep-bodied fish, with a blunt face and a heavily undershot or projecting lower jaw which gapes widely. The razor-edged teeth are wedge-shaped like a shark's, and the jaw muscles possess great power. The rabid, furious snaps drive the teeth through flesh and bone. The head with its short muzzle, staring malignant eyes, and gaping, cruelly armed jaws, is the embodiment of evil ferocity; and the actions of the fish exactly match its looks.

I never witnessed an exhibition of such impotent, savage fury as was shown by the piranhas as they flapped on deck. When fresh from the water and thrown on the boards they uttered an extraordinary squealing sound. As they flapped about they bit with vicious eagerness at whatever presented itself. One of them flapped into a cloth and seized it with a bulldog grip. Another grasped one of its fellows; another snapped at a piece of wood, and left the teeth-marks deep therein. They are the pests of the waters, and it is necessary to be exceedingly cautious about either swimming or wading where they are found.

If cattle are driven into, or of their own accord enter, the water, they are commonly not molested; but if by chance some unusually big or ferocious specimen of these fearsome fishes does bite an animal--taking off part of an ear, or perhaps of a teat from the udder of a cow--the blood brings up every member of the ravenous throng which is anywhere near, and unless the attacked animal can immediately make its escape from the water it is devoured alive.

Number of group members listed below: 3

Through the Brazilian Wilderness (1914)

Suggested links for further research about this character and the character's religious affiliation:
- http://en.wikipedia.org/wiki/Piranha