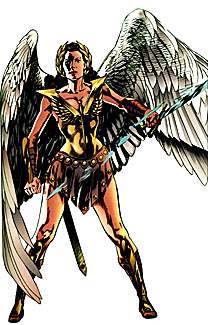 Perhaps I should make a thread only about the comic or religious comics in general, but has anyone read Astro City: Confession? The main character is Altar Boy, the sidekick of the Confessor, who's Catholic. There's also a born-again bunch named the Crossbreed.

Winged Victory appears to be less than a fan of Catholicism, and I'd assume that as a Wonder Woman analogue she's either linked to another pantheon or a variant on Christianity. Shadow Hill appears to be influenced by older, darker religions (was that Cthulu the Hanged Man was wrestling?)

[editor: Shadow Hill is not where Winged Victory lives, but is a section of Astroy City that features prominently in Astro City: Confession.]

Suggested links for further research about this character and the character's religious affiliation:
- http://www.adherents.com/lit/comics/WingedVictory.html
- http://www.comicvine.com/winged-victory/29-41977/