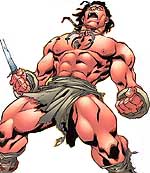 A subordinate group basically means a population that's not a dominant group. And I've got 7 categories to fill; ethnic, gender, religious, sexual orientation, socioeconomic status, age, and physical or mental ability. ..though I think I'll cut socioeconomic status do to it's fine line-ish qualities in comics.

So, how about I'll give what I've got so far, and then feel free to add to my lists. I think I have a pretty good handle on the MU, but it's still huge and I don't want to forget anybody. Should be fun anyway.

Race or Ethnicity: (this is the big one.)

Thanks guys. You're a lot of help in this.

I guess, in my haste, I was going with the American titles of things. So sorry about calling Black Panther "African American" instead of black.

Just curious (and sorry for my ignorance) but what would you call someone like Yukon Jack. All I know of is the 'proper american term.'

Unknown, as stated he isn't human he considered himself a demi-god. His people from the village of Kemteron are vastly different from typical Native Americans.