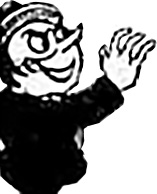 The Religious Affiliation of
Beezil

Bubby and Beezil were the featured characters in an early DC comics humor strip that began in the very first comic ever published by the company that became DC Comics: New Fun #1. Their names are a play on words, drawn from the name of the demon lord (or "devil") named "Beelzebub."

Bubby and Beevil have been described by one commentator as "two little elf creatures." Looking at him, it is hard to imagine that they are intended to be anything other than elves. Given their names (which seem like the names one might give to demons), it seems likely they were conceived as humorously mischievous elves.

In the second installment of their feature, Bubby and Beevil looked for a pot at the end of a rainbow. They found something else entirely. 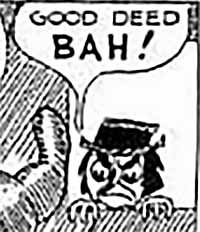 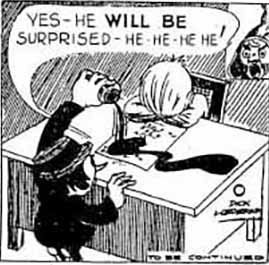 Suggested links for further research about this character and the character's religious affiliation:
- https://www.comics.org/issue/85/
- http://unabridgeddc.tumblr.com/post/34101899494/comic-2-new-fun-2-date-march-1935-cover